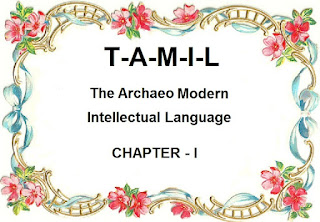 Have you ever heard about a Cavemen’s Language which later developed as a Computer’s Language and still spoken by several millions of people all over the world?. Yes, it is the language called TAMIL.

Tamil, at present, is the Official language of State of Tamilnadu in the Indian sub continent. It is also the Official language of Puducherry Union Territory, Sri Lanka and Singapore. The Tamil speaking Diaspora includes several States of India as well as Malaysia, Miyanmar, South Africa, United Kingdom, United States, Canada, Mauritius etc. Being one of the Scheduled languages of India, Tamil is the first Indian language which was accepted as the Classical Language of India by the then Central Government of India in the year 2004.

There are several thousands of websites available to know about the Ethnicity of Tamil people and Tamil culture. So I am not going to discuss about the same here. In this chapter, first we are going to see about the antiquity of Tamil language from the Linguistic point of view.

There is an old saying in Tamil which describes about the antiquity of Tamil ethnicity which is given below:

The above saying means that, the Tamil ethnicity formed and came forward with Stone Tools even before the Paleolithic Era, where Rocks only exist and no sand formation.

Now, a question arises in most of the reader’s mind that, is there any kind of proof to attest the above statement about the antiquity of Tamil ethnicity.?. Yes, Tamil language itself is a solid proof which is capable of prooving the above statement with the help of its unique words. Before looking into those unique tamil words, we will first see about the origin of Cavemen’s language.

Cavemen, the first ever known human race in the world, are the class of people lived in Caves as their shelter. Infact, Cavemen did not hunt at first for their food. There existed no necessity for them to hunt because hell lot of sweet fruits were readily available for them as food in the Forests. Besides fruits, they also consumed vegetables, flowers, tubers, leaves etc. At one time, Cavemen started to starve because of the scarcity of fruits, vegetables etc. Hence, as a matter of survival, they started to eat the remains of the animals hunted by the Lion, Tiger, etc. This is the first ever notable change in the development of Human race to the next level of human mental evolution.

Again the scarcity of hunted animal remains as a food supplement forced the Cavemen to think about their own hunting. It was not so easy for the Cavemen to hunt the animals alone in the forests. So the Cavemen united together to form groups among them and each group has to help the other in hunting. Cavemen, now entering into a new mode of survival, i.e. hunting, hereinafter were called as Hunters. Hunters, who were formed to several groups, felt the necessity to communicate with each other for hunting. This Hunting necessity became the mother of inventing the first Hunter’s language.

Have you ever thought of how could be a Hunter’s language?. What could be the words spoken by them?. What could be the first possible intuition to develop the basic level of their communication?. Yes, the animals and birds were the first teachers for the Hunters, from whom they learned about the simple methods of communication. Crow’s kaa kaa, Parrots’ kee kee, Cuckoo’s koo koo, Cow’s maa maa, Fox’s voo voo, Sheep’s bae bae were some of the sounds which aroused the first vocal concept of language in the Hunter’s mind. Hunters concluded that simple level of communication can be done with the help of long sounds like kaa, kee, koo, maa, voo, bae etc. This is how the world’s First Hunters’ Language, abbreviated as FHL, was formed.

We have seen earlier that, FHL was composed of single long sounds only for communication. If we consider the FHL equivalent to the Low Level Language or Machine Language of Computers, then the equivalents for High Level languages of Computers should be the modern world languages. This is because, all the modern world languages might have been developed as variants from the FHL only. Ofcourse, this statement should be supported with sufficient evidences, which we will see later in another chapter.

According to the present linguistic scenario, all the major world modern languages have been classified into several groups like indo-european, afro-asiatic, sino-tibetan, austronesian etc. These language groups are classified based on the similarities found within them in the context of grammar, word formations, meanings etc. However, none among these languages except Tamil can be claimed as a living FHL in the world. This is because, Tamil is the only language which still keeps the unique set of words related to hunting and still having thousands of words in common with most of the world languages.

Tamil as the FHL:

In this chapter, I strongly putforth Tamil as the only living FHL in the world. While Tamil meets out all the requirements for a language to be the FHL, it has a scientifically developed structure for word formations too. Before we look into detail about the meanings, we will see about the unique word set of Tamil still in use.

In Tamil language, there are seven long sounds in the vowel set as given below.

There are forty Two long sounds in the vowel + consonant set or simply Compound set of Tamil as given below.

In total, there are forty nine long sounding vowels and compound letters in Tamil language. We will see how this long sounding unique word set of Tamil is related to Cavemen’s hunting profession in the next chapter.