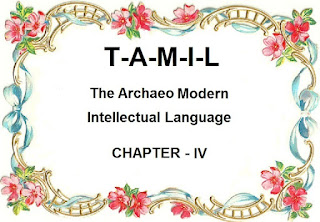 In the previous chapters, we have seen about the archaeic nature of Tamil language,   which is quite compromising with the second syllable description of TAMIL (The Archaeo Modern Intellectual language). We have also seen that Tamil is the only FHL of the world, developed and used the early Cavemen.

Before going to the third syllable definition of TAMIL, i.e. Modernity, we will see about the fourth syllable description i.e. Intellectuality of Tamil language in this chapter.

Intellectuality of a Language:

What does the Intellectuality of a Language mean?. What characters of a language determine whether that language is intellectual or not?. First we will see the answers for these questions.

The Intellectuality of a language is determined by the following characters of that language.

1.  Grouping of voiced sounds based on the science of human sound generation.

2.  Allocation of voiced sounds to notify specific verbs based on the position of sound generators of human body.

3.  Formations of primary and secondary words from the combinations of root words, purely on scientific basis.

We will see the intellectuality of Tamil language based on the above characters one by one under separate headings.

Present Tamil has the following two groups of voiced sounds:

The eighteen consonants shown above are further sub divided into three groups as given below:

In general, humans generate different voiced sounds using different voice generators including nose, tongue, teeth, lips and palate of their mouth. As per the present Linguistic scenario, voiced human sounds are classified into various types including Nasal, Palatal, Labial, Dental, Alveolar etc. based on the place of sound generation.

Modern science of linguistics uses various technologies to identify the exact place of sound generation inside the mouth. Several efforts are also made to understand how different sounds are produced inside the mouth by varying the contacts of the sound organs inside the mouth.

In the Pirhappiyal chapter of Tholkaappiam, he briefly explains about how the voiced sounds are generated within human body in the following poem:

The meaning of the above poem is given below:

The primal air, which evolved from the abdomen, by staying in lungs, throat and head and articulated by teeth, lips, tongue, nose and palate, thus totalling to eight varieties, generates sounds by varying contacts of organs, and hence to explain the generation of sounds, the differential nature of sound formation needs to be evaluated carefully.

Definitions and Criteria in Tholkaappiam:

Before we see the various poems in Tholkaappiam about tamil sounds generation, we need to know about the definitions of some technical terms used in Tholkaappiam.

Muthalnhaa   : This term refers to the stout portion of

Itainhaa        : This term refers to the middle portion of

Nhuninhaa    : This term refers to the tip of the tongue

Tholkaappiam describes about the formation of vowel sounds in tamil language as follows:

The above poem means that, the vowels a and aa will form by simply longitudinal opening the mouth. That means, the primal air evolved from abdomen due to our speaking effort, passes through and vibrates the throat muscles and finally gets out of mouth in open condition thus producing a and aa sounds. In this position, the mouth appears to be opened longitudinally’.

The formation of the vowel sounds e, ee, eh, ae, ai is described in Tholkaappiam in the following poem.

The above poem means that, the five vowel sounds e, ee, eh, ae, ai form in the same position of mouth like that of a and aa, differing in the way of annpal touching the edges of the muthalnhaa. That is, when we try to articulate these sounds, the lower jaw moves upwards and the top row of the teeth touches the edges of the stout portion of the tongue. At this position, the mouth appears to be opened laterally wide.

The formation of tamil vowels o, oo, oh, oa, au is described in Tholkaappiam in the following poem.

The above poem means that, the vowel sounds o, oo, oh, oa, au are formed by the process of closing the lips in a convergent condition. That is, when we try to make these sounds, both the lips move forward, converge at the centre leaving just a small opening for the escape of articulated air from the mouth. In this position, the mouth appears to be closed by the converged lips.

In the previous poems 3, 4 and 5 of Tholkaappiam, we have seen that, the vowels are formed in three different positions of mouth i.e. longitudinal opening, lateral wide opening and convergent closing. In each position of the mouth, two or more vowels are formed. Hence, to differentiate a vowel from another which also formed in the same position of mouth, tholkaappiar has written the following poem.

The above poem means that, although more than a vowel forms in the same position of mouth, very little and insignificant changes in the method of articulation leads to the slight variations in the sound.